Patrick Doering is a police Lieutenant with the Lake St. Louis Police Department and a skilled hostage/crisis negotiator. He recently published his first book: Crisis Cops — The evolution of hostage negotiations in America.

Patrick started his law enforcement career in Lake St. Louis about 20 years ago. As a new officer, he often looked for new and interesting training classes to attend, and soon decided he wanted to find a “niche” in which he could develop some specific area of expertise. One day he saw a flyer for a class called “Initial Response to Hostage/Crisis Situations.” He didn’t think the likelihood of ever being involved in such a situation was very high, but the class sounded “cool” so he signed up.

Ten minutes into the class, it was apparent that the instructor had a “passion and fire in his belly for crisis negotiations.” With such an enthusiastic teacher, Patrick said it was easy to catch fire also. Patrick learned many things that day. One of the most important and memorable lessons was that as a negotiator, you don’t do all the talking; you must also be an excellent listener. Patrick says the Greek philosopher Diogenes sums it up best: “We have two ears and only one tongue in order that we may hear more and speak less.”

After completing that one 8-hour class, Patrick knew he had found his niche. He came home determined to put into practice the art of active listening, and develop other skills needed to become a negotiator. It took a few years, but eventually Patrick was able to attend more training. Then, in 2004 he was given an opportunity to serve on a new county-wide, multi-jurisdictional team that was being formed, the St Charles County Regional Crisis Negotiation Team, and has been a member ever since.

Over the course of his career, Patrick has completed over 400 hours of training in crisis negotiation, including the two-week FBI National Negotiators  Course in Quantico, VA; and The FBI National Academy, of which only one half of one percent of law enforcement officers get to attend. In May of this year, Pat was also selected to attend The London Metropolitan Police National Negotiators Course at Scotland Yard.

Most of the training programs available to law enforcement crisis negotiators have been developed from the trial and error experiences of real life situations. In his book, Crisis Cops, Patrick interviews pioneers from the 1970s and ’80s who negotiated everything from hijackings to bank robberies to hostage situations and suicide attempts. Patrick shares their stories—colorful, comical, tragic and heartbreaking—distilling the essential communications, tactical and human lessons he and his colleagues have learned over the years.

The book shares the stories of 22 negotiations from 16 law enforcement agencies across the nation, including the FBI. All of the stories are based on real life situations; a couple have become the basis for popular movies. The stories are of value not only to people in law enforcement, but also from the perspective of human interest in unique, real life situations, and the resulting outcomes. As one reviewer described it: “Interesting real-life tales…gathered by a cop who negotiates tense, life-or-death situations with individuals who are on the edge….. At times humorous and at times horrifying, these stories are colorfully told and include practical advice and lessons learned. Law enforcement officers and anyone involved in negotiating will find this book helpful.” 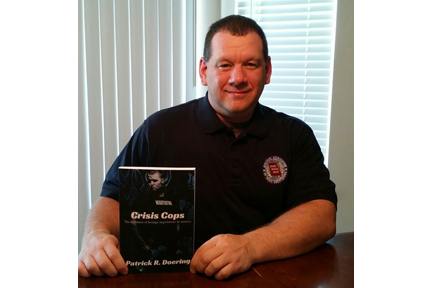 Patrick Doering grew up near New Melle where he lived with his parents, Marilyn and the late Patrick Doering, and sisters Michele, Tanya and Andrea. He attended Daniel Boone Elementary and Francis Howell High School, and was awarded a Football Scholarship to Lindenwood University where he ultimately earned a Master’s Degree in Criminal Justice Administration. Back in 2011, because there were no training courses available in Missouri, Patrick and others on the St Charles County Regional Crisis Negotiation Team started The Missouri Association of Crisis Negotiators (MACN), which  hosts annual conferences and periodic regional training events and competitions involving a myriad of agencies from throughout the state. In addition to his law enforcement activities, Patrick coaches football at Francis Howell High School. He currently lives in Wentzville with his wife, Heather, and four children.